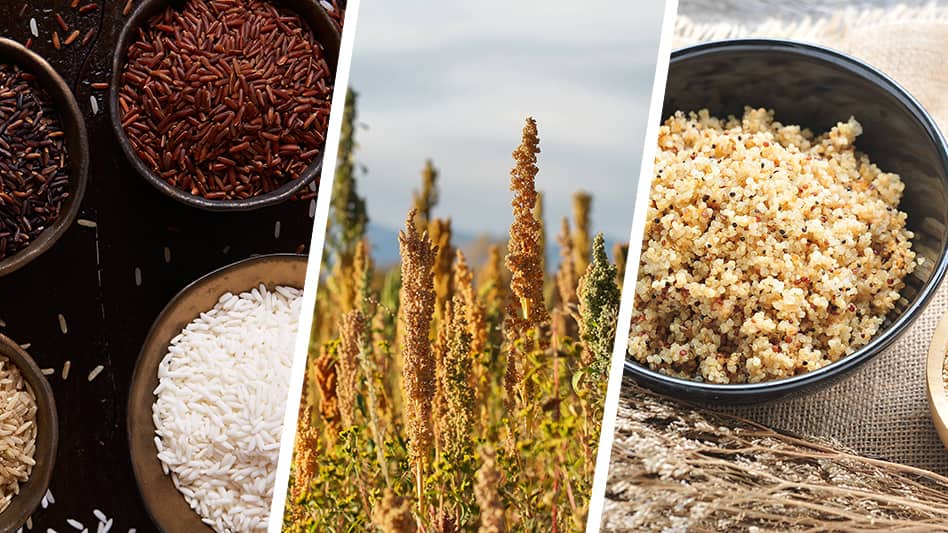 Quinoa vs rice – what is the difference? Do they really produce different flavours, textures and health benefits? Can one or the other make or break a dish? We’ve uncovered the true differences between the two buzz words and found where they will both work best on your current menu.

The yearning for carbohydrates while on a diet has always been a forbidden thought for consumers. As more Australians become conscious of their eating habits and begin their health kick, the pressure is on chefs to uncover new ingredients, products and dishes that meet the healthy eating requirements.

Despite carbs receiving a bad rap from the health-aware consumer, dieticians continuously squash the theory. “Carbohydrates are a major source of fuel and nutrients for our bodies,” states Harvard Health, who claim carbs are used to provide the body with the energy it needs to function on a daily basis.

In recent times, venues have provided guests with healthier options, such as oil instead of butter and spices over salt. The latest debate is now over, what is the difference between rice and quinoa, as the latter begins to pop up on menus across the country. Datassential’s senior publications manager, Mike Kostyo explained to QSR Magazine that over the last four years there has been a 350% increase of quinoa being added to dishes at venues.

The spokesperson for the business explained the progression of using quinoa is significant considering “a decade ago most people had never heard of [it].” Mr Kostyo believes the interest in quinoa has risen because “consumers now want to feel good about what they’re eating…so it fits in the clean-eating trend.”

But how does rice and quinoa stack up against each other? What are the differences between them and how can you turn them both into kitchen staples by including them in numerous dishes on your menu?

What is rice and how do all the varieties differ? 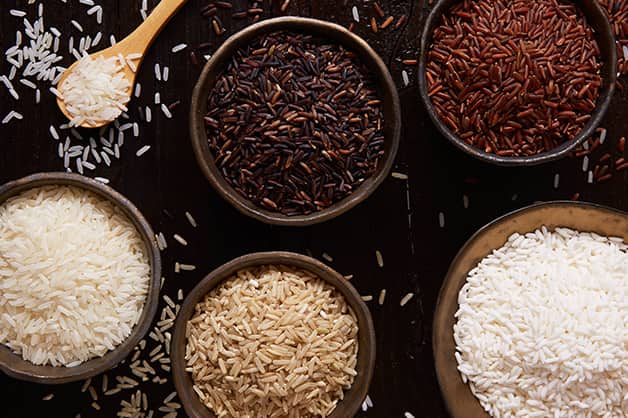 Everywhere you go, every menu you read, without a doubt there is a dish that features the ancient grain of rice. Whether it is as a its own standalone dish, such as a fried rice or as an addition to a salad or poke bowl, rice has made its mark on both, chefs and consumers. Though, these days there are a variety of rices on the market that come in different colours and sizes, but the two most popular are white and brown.

White rice is a fluffy grain that has its husk, bran and germ removed and is then enriched to restore some of the nutrients that had been stripped. This process alters the rice’s flavour, texture and appearance while also extending its shelf life, making it a product you can store for longer periods at a time (if of course stored appropriately in a cool, dry place).

Whereas, brown rice retains its bran and germ throughout processing, allowing it to maintain some of those powerful nutrients. These steps also ensure the brown rice retains valuable minerals like magnesium, phosphorous, and manganese. Cooked brown rice is darker in colouring and offloads a nuttier, chewier texture, so it may not be suitable to dishes where you require a cleaner flavour.

But it isn’t just colouring that offers different textures and flavourings – so, does the physical size of each of the rice types. Short grain rice is known to be rounder due to it containing more starch. This form of rice is commonly used for sushi and risotto recipes because each dish needs the sticky texture that short grain rice offloads. Whereas, long grain rice is firmer and longer and has a drier texture, making it perfect for pilaffs, and as a side for Indian, Malay and Thai cuisines. This choice of rice is recommended because it doesn’t form a sticky texture once cooked, instead it turns into firm, separate grains.

How to cook rice to ensure it’s a fluffy, delight: 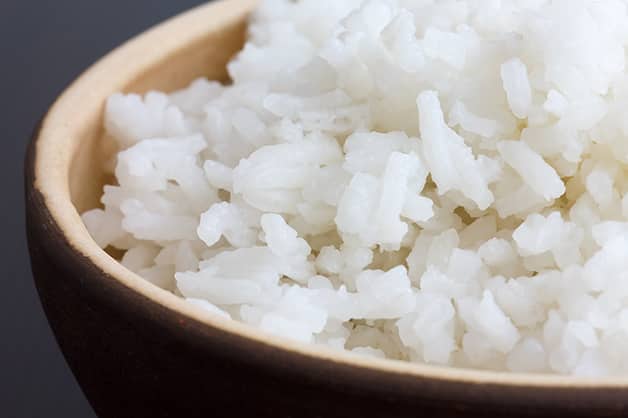 Aside from picking the right type of rice to suit your dishes needs and requirements, when it comes to making your rice fluffy and desirable, timing is everything and all it can take is one minute to turn it into a sloppy mess. To keep wastage down and to ensure you cook perfect rice every time, it is suggested you use one cup of rice to two cups of water in a pot on a medium heat on the stovetop. Better yet, some venues are now incorporating rice cookers into their kitchen to save them time and labour costs. For the best results, thoroughly rinse and soak the rice in cold water for 20 to 30 minutes to remove excess starch prior to cooking.

Ways to include rice on your current offering without breaking budget: 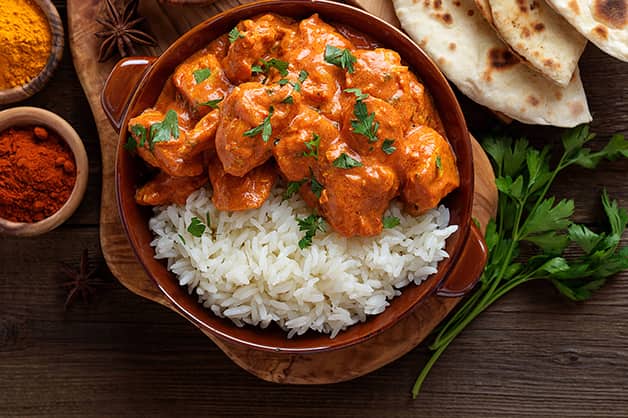 Rice is on every menu in one way or another. Whether it is part of a Mexican burrito bowl, as a side dish or as part of a curry; rice is considered one of the most commonly consumed ingredients. At the renowned Three Blue Ducks restaurant, they offer their customers rice across a number of their dishes. As part of their breakfast menu, they have developed a broccoli and cauliflower rice bowl that incorporates wild rice, showing that with a little bit of creativity rice can be an attention grabbing breakfast option as well as a traditional lunch or dinnertime cuisine. 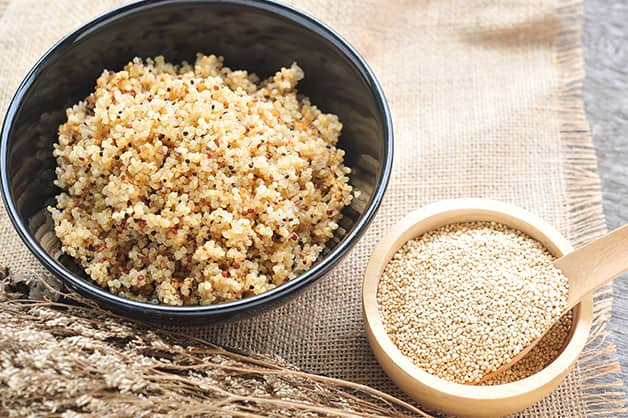 Quinoa has been around for thousands of years, but over the last few it has gained traction amongst consumers due to its perceived health benefits. As more customers are increasingly conscious about what they eat and their overall health, they are beginning to make the switch from pasta to quinoa.

The offering is now considered one of the most appealing health foods due to it having fewer calories and carbohydrates compared to white rice. While quinoa is often identified and eaten like a grain due to its similar nutritional profile, it is in fact a relative of the vegetable’s spinach and beets. It has a soft texture and neutral flavouring but can become chewier if it’s cooked incorrectly.

How to prep quinoa to reduce the risk of it turning clumping: 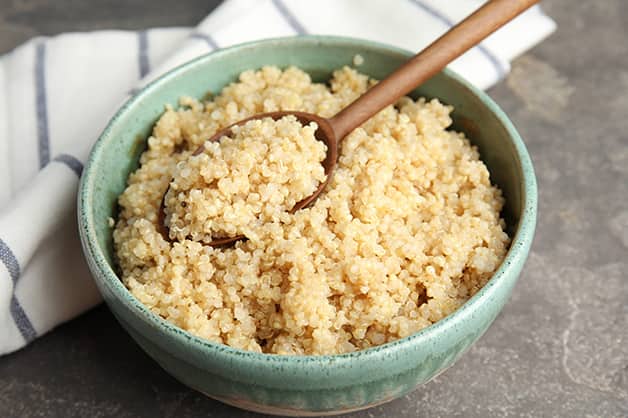 When it comes to cooking quinoa, the rule of thumb is one cup of quinoa to one and a half cups of water. Though before combining the quinoa and water in a pot, it is recommended that the grain is washed under cold water to ensure any saponins are removed. Saponins are a natural insecticide that forms to protect the seed and can often release a bitter taste if not removed prior to cooking. Once the pot is on the stove, bring to a boil then reduce heat to low and place the lid on to allow the mix to simmer, then allow to rest. Resting the quinoa ensures it doesn’t clump together and provides it with time to dry out and form its fluffy texture.

Not sure where you can add quinoa to your menu? 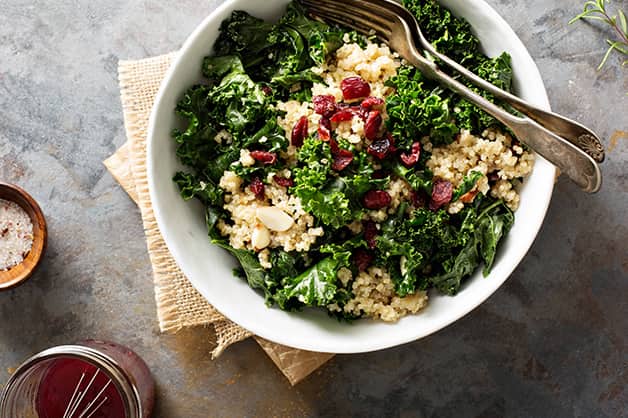 Despite it now being a new trendy ingredient to add to menus, quinoa is considered an addition to a dish rather than a stand-alone offering, limiting your ability to experiment and show off your creativity. Quinoa is commonly added to salads that are rich in natural flavours and nutrient-filled vegetables. At The Botanica Vaucluse, they offer their customers a green breakfast bowl that incorporates quinoa within its falafel. The popular ingredient has also been transformed into a sweet corn and polenta fritter, as well as a chickpea, kale and quinoa falafel that is available for lunch and a Botanica teff and quinoa bread loaf with olive oil.

Both quinoa and rice are ancient ingredients that are commonly used by chefs in a number of ways throughout the kitchen. Whether it is for health reasons or simply for flavour and texture, the two products can be found in all kitchens. While they share some similarities and differences, the best thing about them is that they are both naturally gluten free – making it perfect for those customers avoiding gluten in their diet.

Though, remember to check the packaging ingredients as the factory it was processed in may contain wheat products. And don’t forget to make sure you prepare the rice and quinoa dishes in an area where it can’t be exposed to gluten, either through the air or physically.

So, while quinoa can cater to the bourgeoning health craze, those without this focus will still default to their tried and trusted rice dish. While there are some customers who can’t wait to try the next best thing on the market, there is a large percentage of clientele who rather choose their all-time favourite because they know what to expect when their spoon hits their mouth – so do yourself a favour and keep your rice dishes front and centre!