Whether it’s consumed on its own or used as an ingredient, chocolate is one of the world’s most popular food types and flavours that will never go out of fashion. Now, many chefs are experimenting with chocolate and how it can be used outside of desserts to enhance savoury dishes. 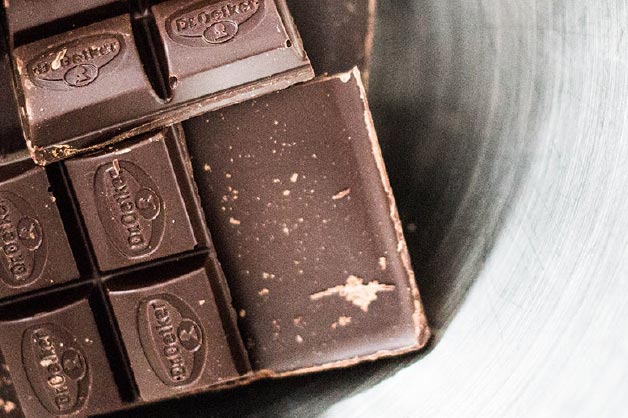 The different types of chocolate:

There are three types and four flavours of chocolate on the market, which contain different ingredients that provide a completely different taste.

Part of the cocoa butter may be a vegetable fat. Milk solids e.g whey powders, whey derivatives and dairy blends are permitted. However, there is hardly any difference between the production process of genuine chocolate compounds.

Is a term used to describe professional-quality coating chocolate with a high percentage of cocoa butter, with at least 31 per cent and as high as 39 per cent for good quality couverture. The extra cocoa butter allows the chocolate to form a thinner coating shell than non-couverture chocolate.

From dark, milk, white and ruby – the range of chocolate for chefs are endless. With a distinct colour difference, each type of chocolate offers a unique flavour and taste.

Here’s how each chocolate differs:

Is the best-known kind of eating chocolate. Milk chocolate is made by combining the chocolate liquid, extra cocoa butter, milk or cream, sweetening and flavourings.

Is made from cocoa butter, milk, sugar and vanilla.

Was placed on the market in late 2017 and is the first new variety to be introduced since white chocolate 80 years ago. It’s made with unfermented cocoa beans, which produce the red-pink colouring and has an intense, yet smooth and berry taste despite no berries or berry flavouring being added to the chocolate. 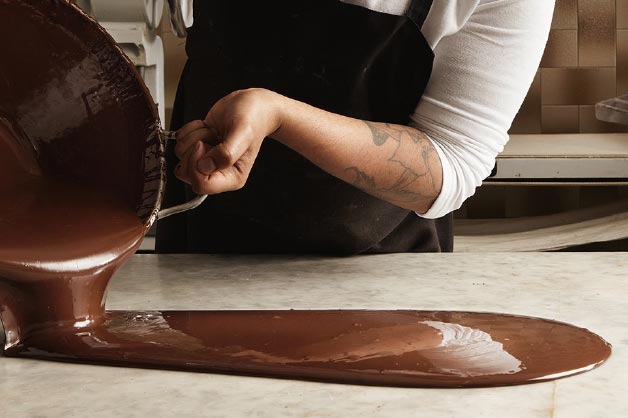 Put a twist on cooking with chocolate:

While chocolate is a go-to favourite in many sweet snacks and desserts, chefs across Australia and the globe are now incorporating chocolate into their main courses. A most common savoury dish that uses chocolate is the Mole Chilli Con Carne, which includes unsweetened chocolate.

“We simply just melt the chocolate and add it to the potato mash,” he explained while adding they opted for the white chocolate because it doesn’t change the colour of the overall dish. “The white chocolate sweetens the mash and adds a real creaminess to it as well.”

Craig said his guests have taken the creative concept well, with many requesting it again after it was taken off the menu last year. “It is a very popular dish because it is different. When we took it off, there were a few who requested it again, so we have had to re-add it to the menu.”

Hill of Grace Restaurant in Adelaide, also dishes up chocolate in their main menu with a seared Paroo kangaroo with juniper and chocolate labneh. Across the seas, Hotel Chocolat’s Rabot 1745 in London dedicates their savoury dishes to chocolate with the menu ranging filled Yorkshire Pudding with white chocolate mash and marinated beef and white chocolate horseradish sandwich.

Owner of London’s Bocca di Lupo and Geluop, Jacob Kenedy also uses chocolate throughout his mains menu explaining: “Chocolate can be a great ingredient in savoury food, in particular with dark red meat, hare and duck but must be used with a balanced hand and sensitivity. Together with acid flavours, such as vinegar or tomato, and/or hot or aromatic spices, it can be revelatory.”

Are chocolate desserts coming to an end?

With the rise of restaurants using chocolate in their main courses, the question rises, is it going to remain a staple on dessert menus? But according to menus across the nation, chocolate desserts are going nowhere anytime soon – with it taking up majority of the lists.

He added that many of his dishes on his dessert menu are based around chocolate, including one that has three different elements. “We have a dish that has a chocolate mousse that is set in a chocolate mould, then a chocolate dipped strawberry on a lemon mortal stick. It also has a salted caramel macadamia crumb, finished with a white chocolate and dry strawberry ice cream,” Craig revealed.

The chef and restaurant owner also explained that while he likes to experiment with his unique desserts, venues should never go past the classic chocolate desserts of a traditional brownie, mud cake or ice cream. While many people like to explore their tastebuds, there is also majority who like to stick to the classics and catering to them is just as important.

The best chocolate to use for melting and tempering:

Melting chocolate sounds like it should be a simple task. Though, there are particular chocolates that melt best and techniques that can avoid the sugary white particles and blooming.

Compound chocolate has been verified as the best chocolate for basic melting, as well as baking and cooking, whereas couverture chocolate is best for tempering. Tempering is to bring chocolate to the working temperature (this varies depending on the type of chocolate – see below).

Tempering gives chocolates, especially dark chocolate, a shiny gloss. This step is essential as it helps the chocolate to contract and to unmould easily. Tempered chocolate has a good snap due to its good crystal structure created in the process. 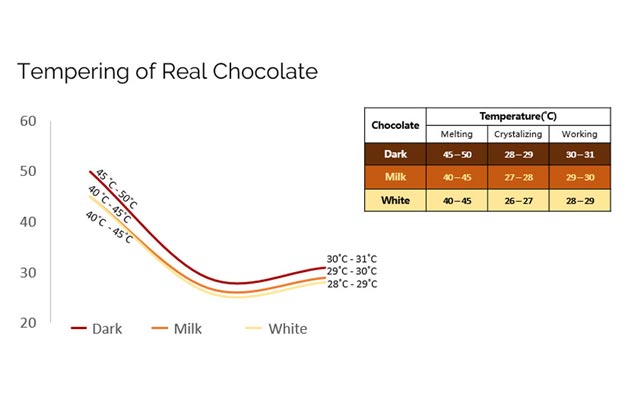 So, while there is a range of variations of chocolate on the market, each has their unique flavour offerings and purposes. Experimenting and working with chocolate can take a dish to a whole new level, providing customers with a new and different dining experience, whether it is as a main or dessert.

Tell us how you incorporate chocolate into your menu!