The sandwich world tour: bring international flavour into your venue 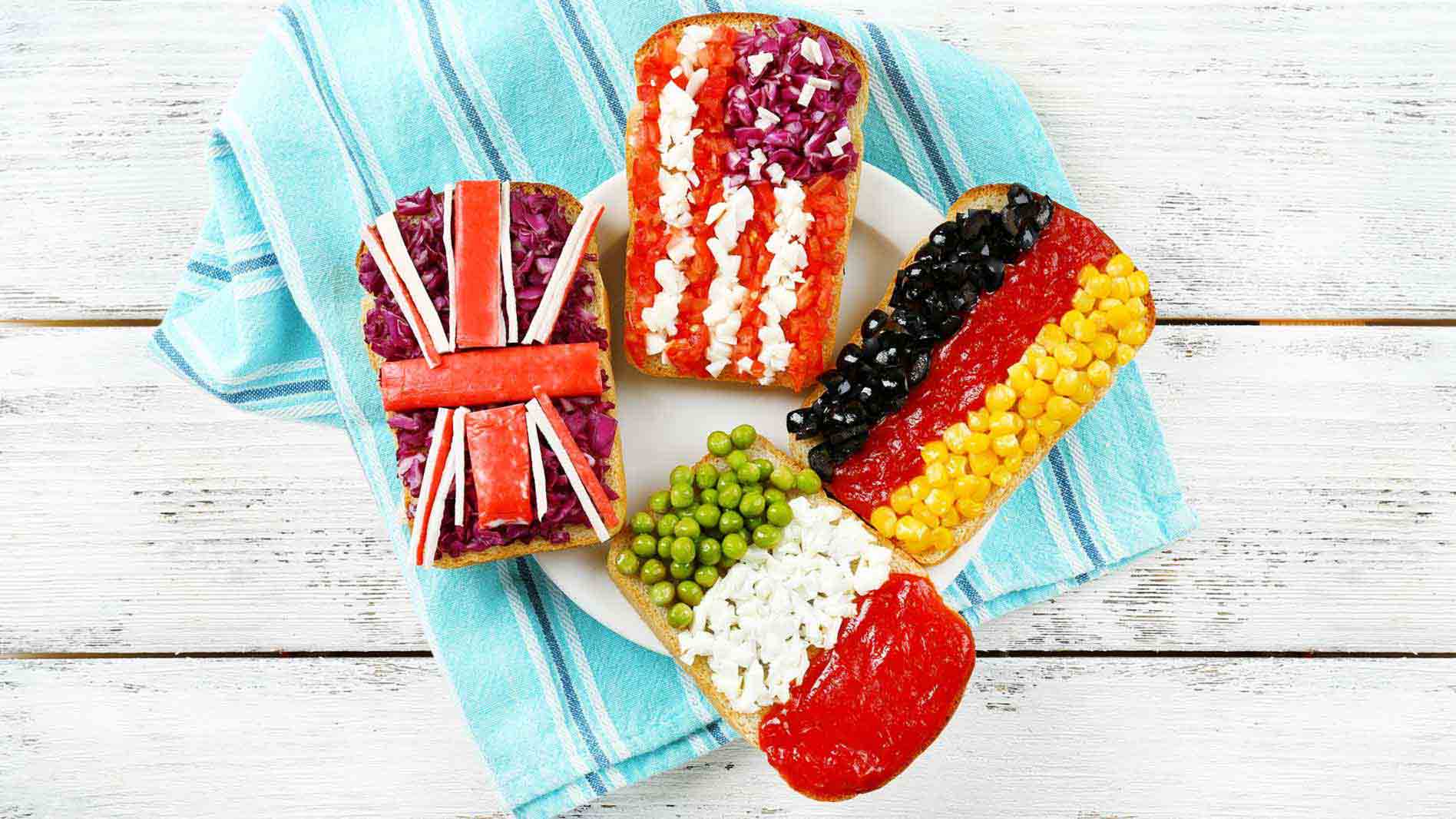 The sandwich world tour: bring international flavour into your venue

As consumers continue to move away from deep-fried foods and shift their eating habits to fresher alternatives, it’s no wonder the sandwich industry is growing across Australia. That’s why we’ve taken a tour across the globe to find the tastiest, heartiest sandwiches there are on offer. So, it’s time to push that ham and cheese roll aside, and get inspired from all the different flavours and culture influences available.

Prepping and providing a substantial lunch for your customers doesn’t always have to involve a large salad or schnitzel, chips and salad. Sometimes the trusty old sandwich is simply enough. Sandwiches used to be viewed as a traditional school lunch that was quick and simple to make and enjoy. But as more Australian workers continue to eat their lunches at their desk, they are reverting back to the simple, yet tasty option – but this time round buying them pre-made.

Over the next five years, the sandwich shop industry’s revenue is expected to grow by 4.1% to $906.6 million, according to Ibisworld. And while the industry grows, sandwich-giant, Subway continues to dominate the industry across Australia, accounting for over 80% of the market in 2018. While Australians continue to jump on the sandwich bandwagon, venues can take inspiration from the rest of the world and how different nations and cultures indulge in a perfectly created sandwiches, rich with powerful in flavours.

Check out some of the world’s famous sandwiches, and how you can put a twist on your offering to win over customers in the coming months.

France is renowned for their cooking and food. But their Croque Monsieur sandwich is the dish that has won hearts across the world. Their dish is a cross between a lunchtime sandwich and the breakfast French toast. It’s completed with layers of ham, slices of gruyere cheese and a spread of butter before being coated with egg and water, then pan-fried for a crisp finish. 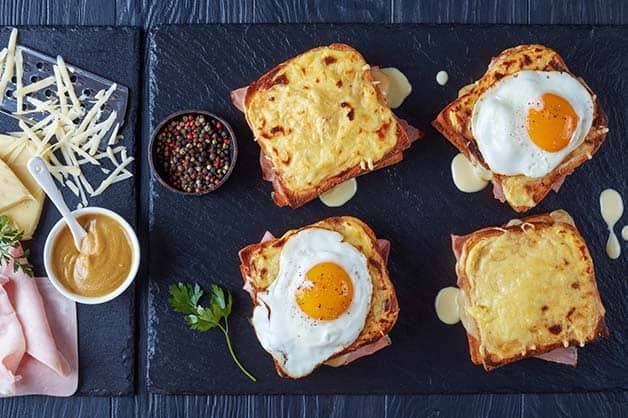 Travelling across to England:

When you think of a well-known English dish, you can’t really go past the classic Cucumber Tea Sandwiches. Enjoyed by the Queen herself, the sandwich is decked out with fresh slices of bread, a spread of cream cheese, thinly sliced cucumbers and a sprinkle of garlic, salt and dill. The popular go-to dish can be found on many menus across England (including high tea venues), making it one of the country’s most renowned offerings and an eye-catching option for Australian menus. 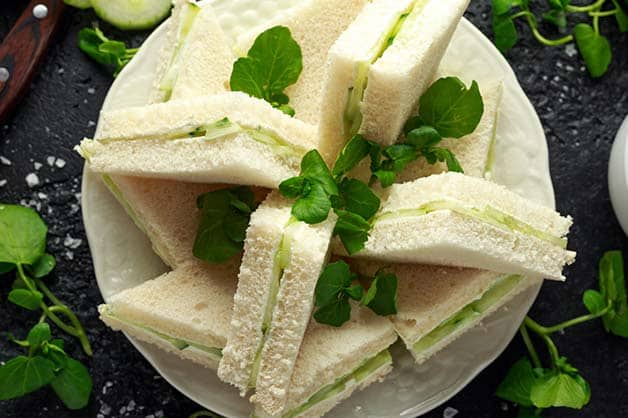 Now down to Italy:

They’re renowned for their delicious pizzas and pastas, but the Italians also have a surprise offering that is simple to make but rich in flavours – the ultimate Prosciutto Baguette. This delicious roll has a crisp, golden shell and is filled with fresh, creamy mozzarella, rashes of thinly sliced prosciutto and finished with fresh basil leaves. Served with a freshly baked roll, it’s the ultimate lunchtime treat. 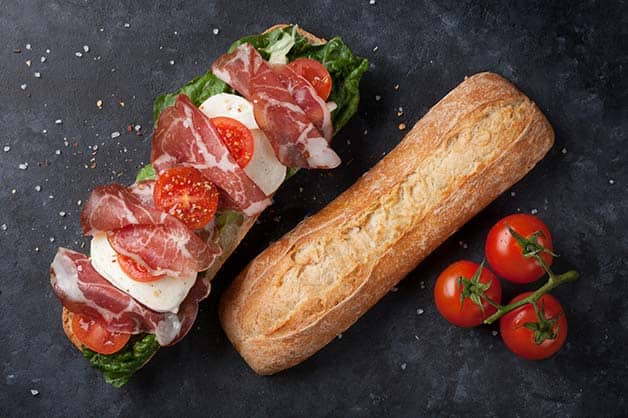 Sailing across to Greece:

The Lamb Kebob Pitas is the most popular sandwich offering within Greece and it’s not only loved by locals but also foreign visitors. The pita is filled with skinless lamb sausages that have been marinated in red wine vinegar, garlic and onion. It’s then completed with fresh tomato, red onion and parsley, as well as a spoonful of homemade tzatziki sauce. The tzatziki is made from traditional Greek yoghurt, garlic, olive oil, cucumber, dill and wine vinegar, to give it the tangy finish. 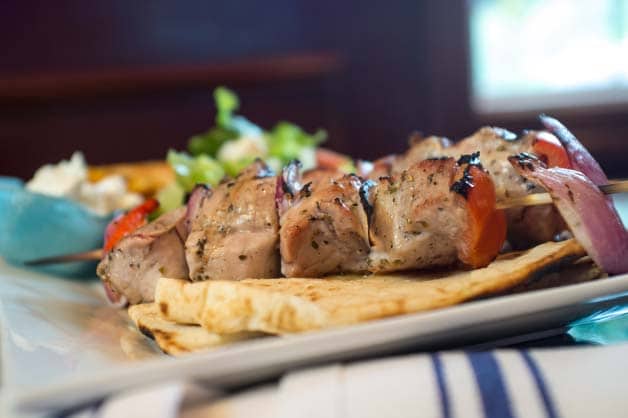 An old-school classic from Portugal is their Francesinha. While the look of the dish may turn consumers away, locals are quick to order it when dining out. The sandwich is known for looking like a lasagne floating in a layer of oil, but it is, in fact, a ham, linguiça, fresh chipolata sausage and steak sandwich covered with a thick layer of melted cheese and drenched in a beer sauce. Not a dish that lends itself to takeaway – the sandwich is typically served with potato fries as a side offering. 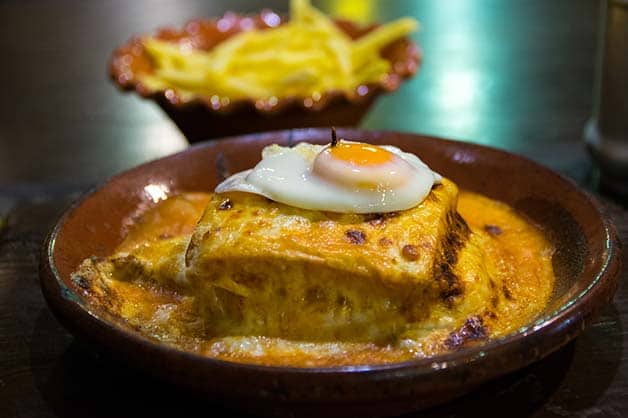 Down to South Africa:

Typically served as a foot-long, the South African Gatsby is a popular sandwich amongst fast food and takeaway joints in the Western Cape area. The sandwich has a protein base, with vinegar coated French fries and a sauce of personal choice. Common proteins used are masala steak, chicken, polony (a bologna sausage), Vienna sausage, calamari, fish, or chargrilled steak. 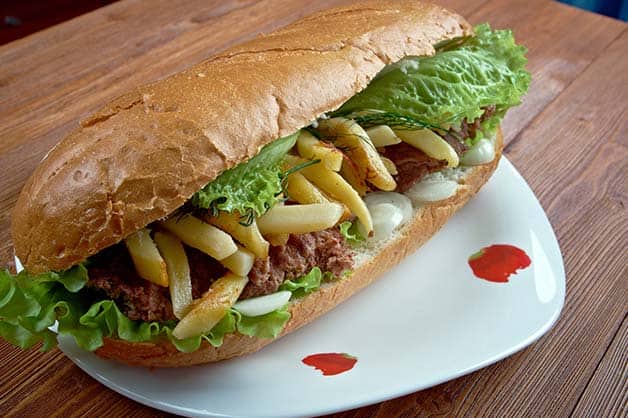 Up north to Canada:

Over in Canada, the weather can get practically artic, so it’s no wonder their go-to sandwich dish is a smokey, warm one. Their legendary Montreal Smoked Meat Sandwich is on the must-try list for many locals as it is stacked with a range of smoked meat. The meat is cured in seasoning with cracked peppercorns, mustard seeds and garlic, before being smoked. When pulled apart the meat rests between two slices of rye bread and is finished with a spoonful of mustard. It’s that simple, easy and tasty. 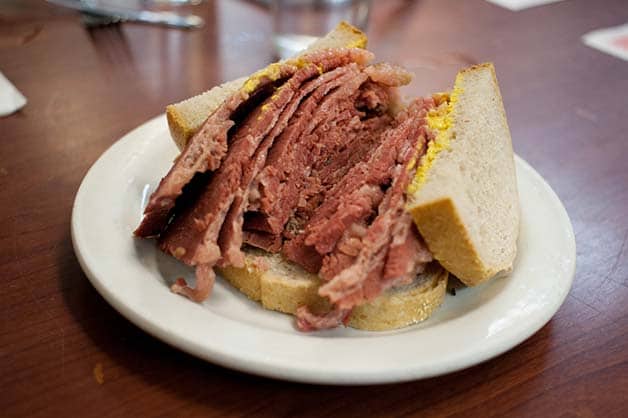 Crossing to the United States of America:

While the Americans are renowned for their extra-large, deep-fried meals, their Reuben Sandwich is one that both locals and travelling guests rush to give a try. The famous dish is a traditional grilled sandwich filled with warm corned beef, melted swiss cheese, sauerkraut (raw, fermented cabbage) and a traditional Russian Louie dressing. Another popular sandwich on offer that cannot be forgotten is their Philly Cheesesteak, which is made of ribeye and melted cheese, placed between buns topped with fried onions, mushrooms or peppers. 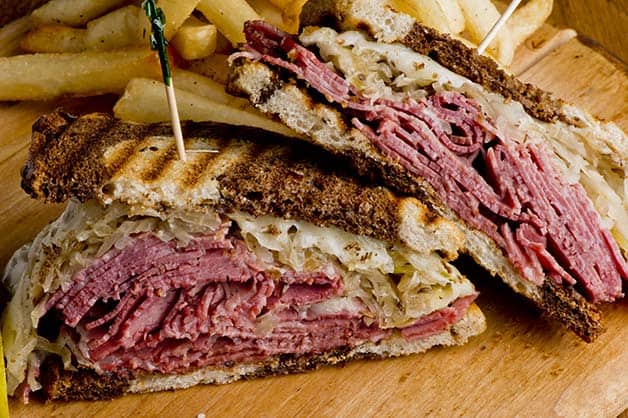 Mexicans are known for their juicy burritos and naked bowls but they also have another dish that locals enjoy regularly. The Cemita (also known as the Cemita Poblana) is commonly sold by street food vendors and consists of an egg-based brioche bun, topped with sesame seeds. The filling is full of flavour, with layers of sliced avocado, white cheese, onions, herbs, salsa roja and deep-fried beef. 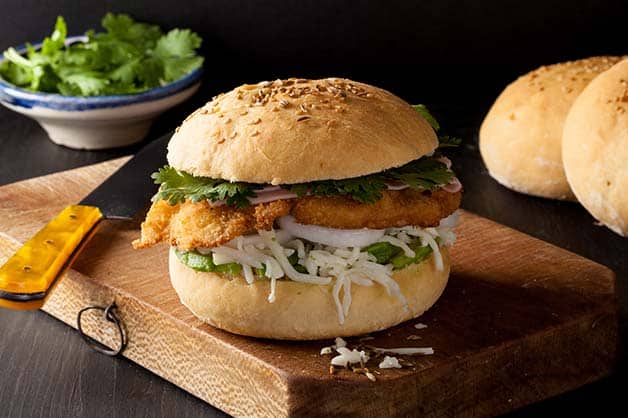 Flying over to Japan:

Katsu chicken is commonly used in curries across Japan, but their Katsu-Sando combines the love for the coated chicken and fresh, soft bread. The Japanese deep-fried chicken is placed between two slices of white bread and topped off with mustard and mayonnaise. 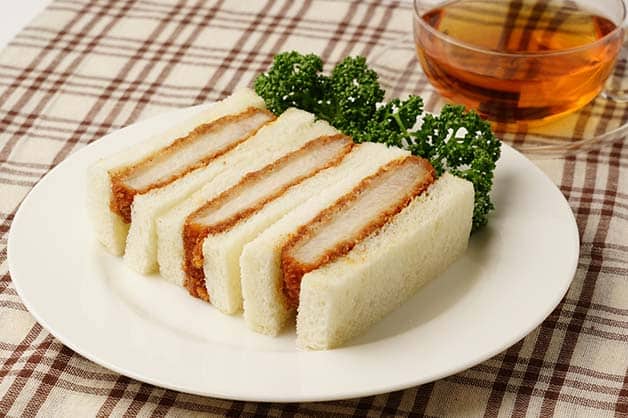 In Taiwan, their traditional sandwich moves away from the usual two slices of bread and switched them for light, fluffy steamed buns. The Gua Bao has a steamed bun rolled out thinly at six to eight centimetres and folded in half. Inside the fold, it homes diced pork belly, pickled mustard greens, fresh coriander and ground peanuts. Your taste buds will never be the same again. 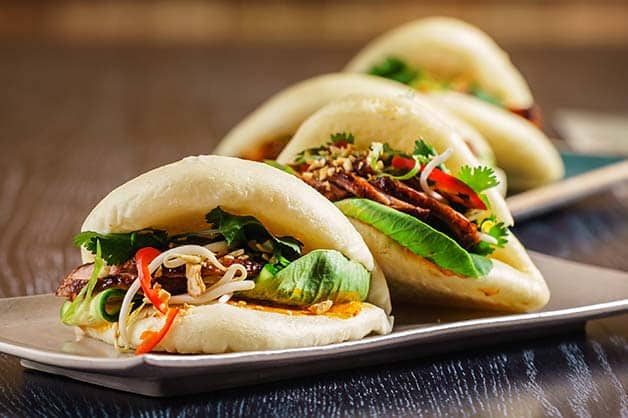 Now over to India:

Placing hot, delicious curries aside, the Indian culture thrives off traditional, easy-to-eat street food. Their Vada Pav is their go-to sandwich style, and it is completely meat-free, with the ability to also be transformed into a vegan-friendly offering. The customary sandwich consists of a deep-fried potato dumpling placed inside a fresh bread roll. It is then finished off with a thinly sliced green chilli pepper and chutney, which is an Indian sauce consisting of spicy coconut dip, tomato relish, ground peanut garnish, cucumber and mint dip. 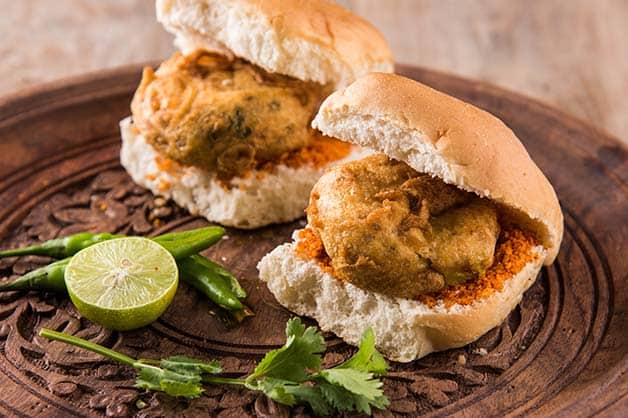 The Vietnamese are known for using fresh, locally grown ingredients, so it’s no wonder their Grilled Chicken Banh Mii is regarded as one of their most common dishes. Its rich flavours come from its marinated chicken, which is coated with fish sauce, lime juice, sugar, garlic and jalapeno. Commonly using a fresh bread roll, it is filled with the warm sliced chicken, completed with red pepper, carrots and radishes that have been coated with rice vinegar and salt. 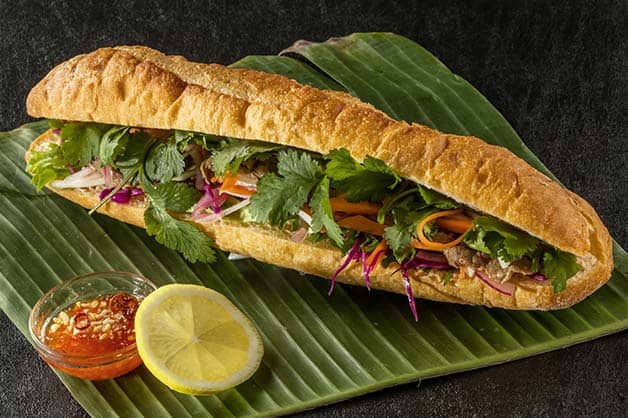 While noodles are a popular cuisine over in Singapore, Kaya Toast is a must-have across their sandwich bars. The Kaya Toast is a sweet sandwich that is cooked in a similar way to French toast. The fresh bread is coated in butter and kaya jam, made from egg and coconut milk. It is then fried and served with a boiled egg on top. It is traditionally found on breakfast menus across the country. 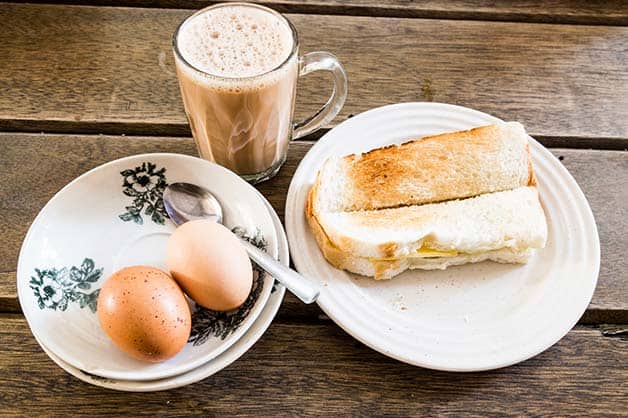 Lastly, our own backyard of Australia:

This one shouldn’t surprise you but Vegemite is regarded as Australia’s go-to spread. So, it’s not shocking that our almighty Vegemite Triple Decker is renowned across the globe. With three slices of buttered fresh bread, layered with tomato, ham, lettuce, finished with a spread of cream cheese and Vegemite. The simpler option, a standard Vegemite and Cheese Sandwich is also, always a crowd pleaser. 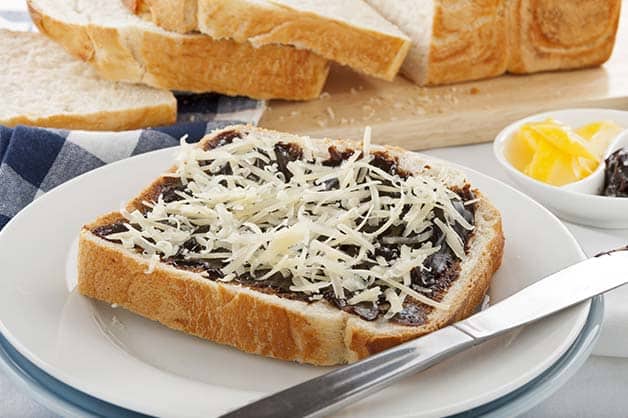 So, no matter where you travel in the world sandwiches are a delicacy that are loved and shared. They are a common offering that can always be found on menus no matter where you are. Whether they are filled with fresh salads, roasted meats or traditional spreads, sandwiches will always have a place in consumer’s diets. Fresh or toasted – make sure your offering is up to scratch this year as your customers continue to make their switch to the easy-to-eat options. 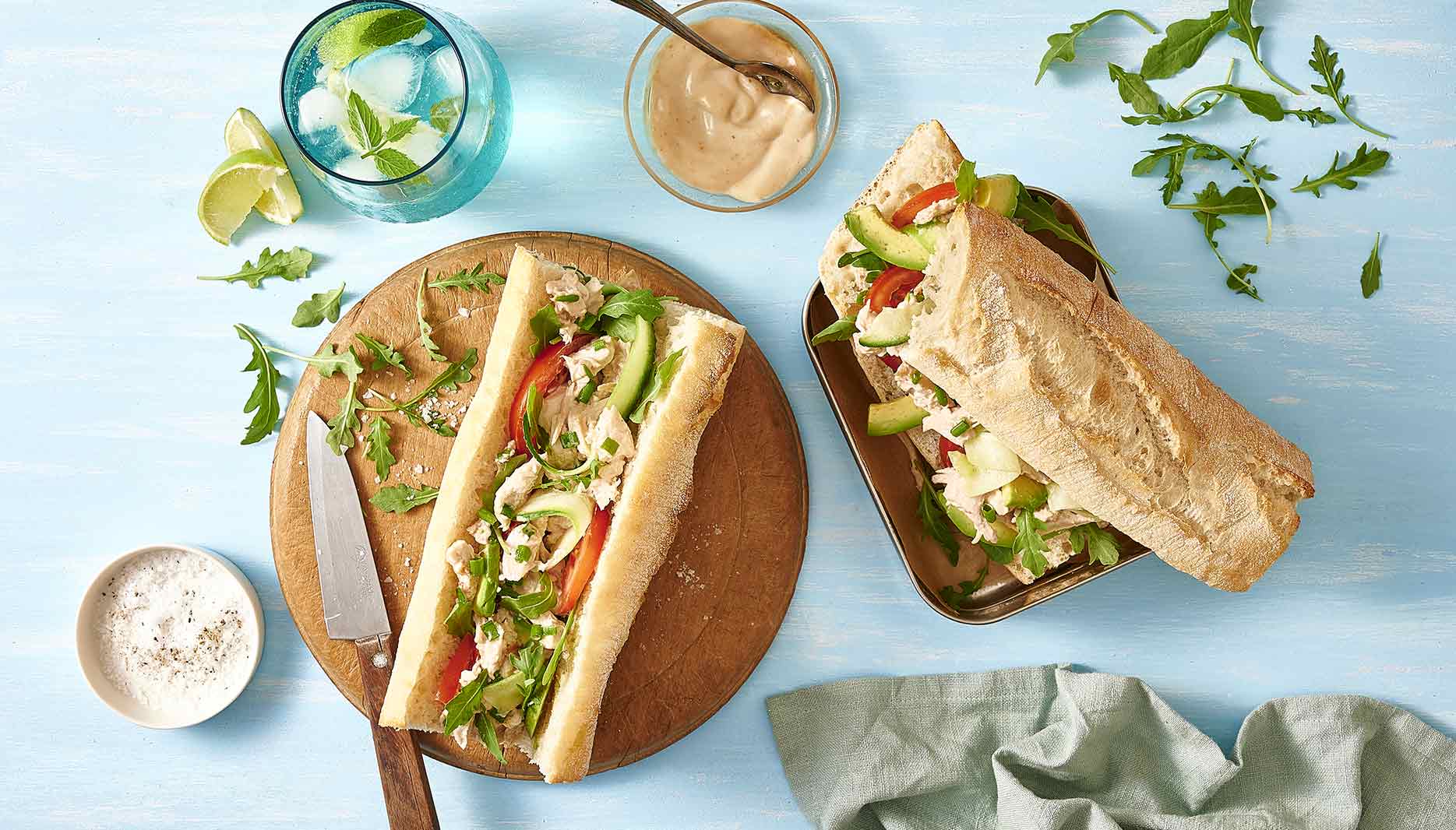 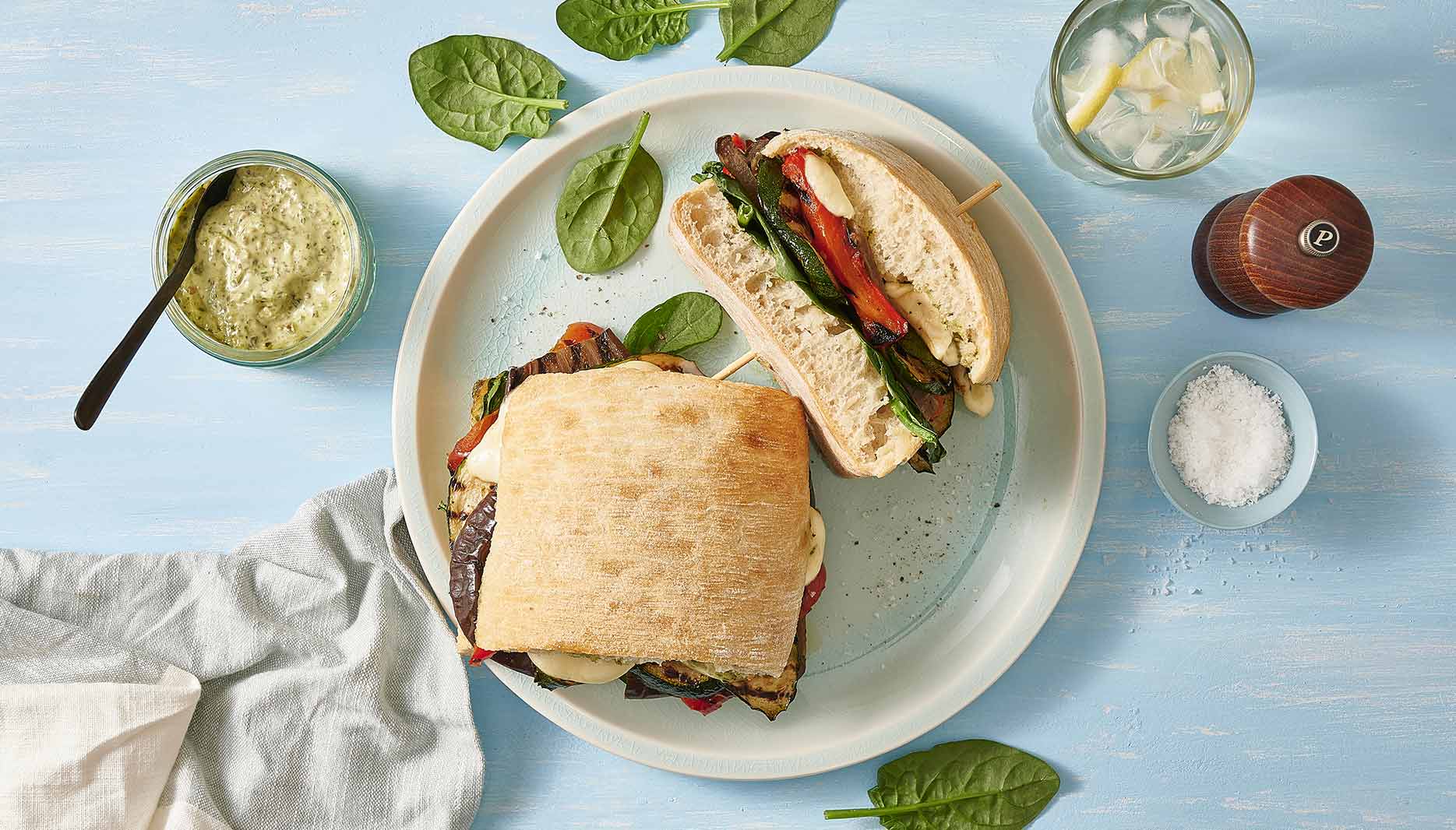 Rich and garlicky, this vegetarian panini is packed full of earthy goodness. Served warm and toasty, it’s perfect for lunch or as a light dinner.
Read more