Luke Mangan Reveals How He Went From High School Drop Out To International Renowned Chef! 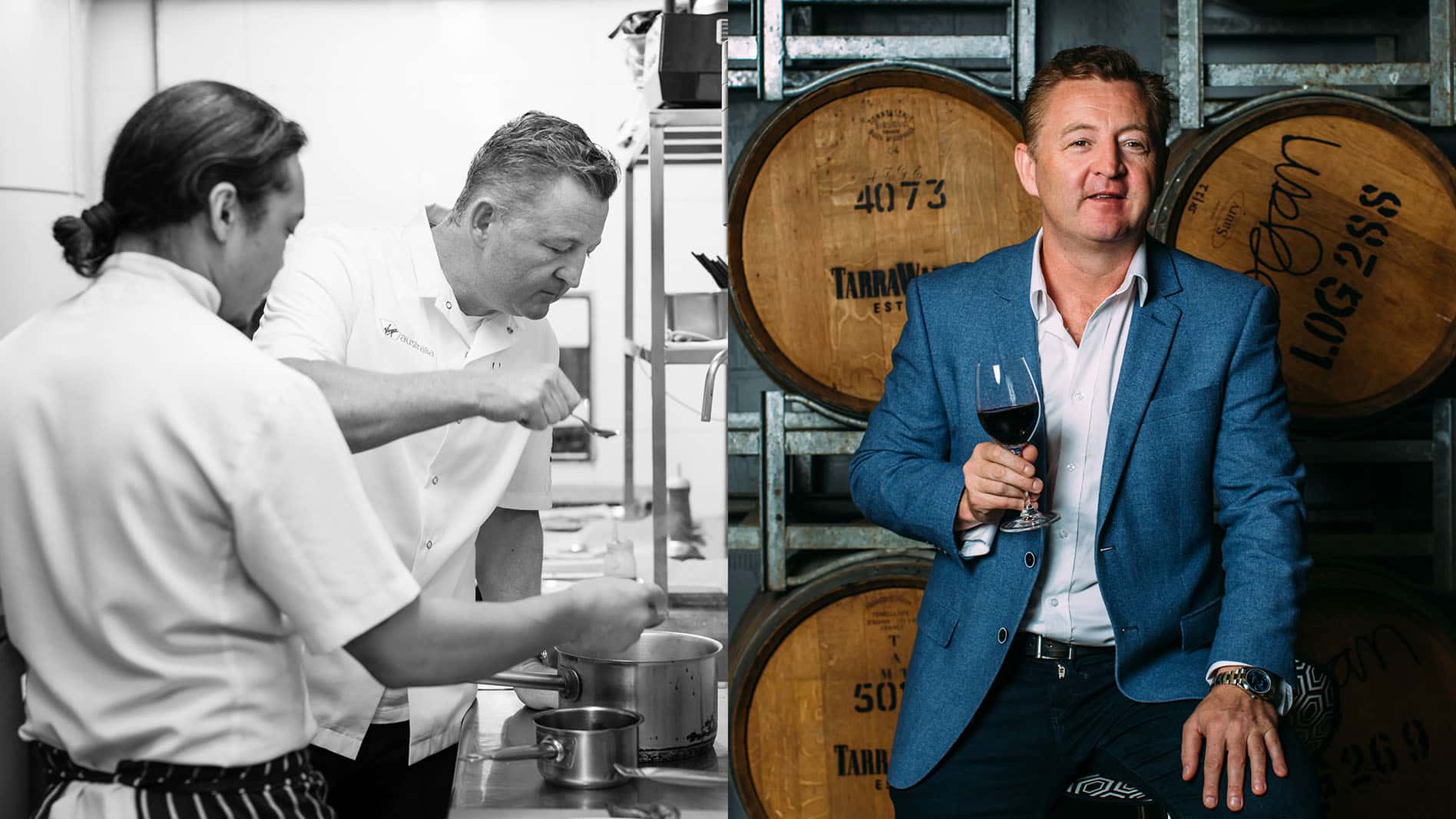 Luke Mangan Reveals How He Went From High School Drop Out To International Renowned Chef!

Take 20 restaurants, five cruise ships, one airline, one train, four books, 19 head chefs and spread them across four countries. This is the recipe of Luke Mangan’s food empire.

Luke Mangan opens up about why getting kicked out of school was the best thing that happened to him, what it’s like to run 20 restaurants and why Australia has the best produce in the world.

“Gosh, that does seem like a distant memory, I feel quite old now! It was just before the Olympics, which proved to be great timing because of the promotion Australian tourism, including restaurants, were enjoying at the time. That was a fantastic time for me and really helped me get established as a chef.”

When did you know it was time to expand after you opened Salt?

“I was really fortunate to have some great opportunities come my way, call it itchy feet or the luck of the Irish! But after the success of my first Salt I knew it was time to expand. I had done all sorts of things before opening my first restaurant, like selling my own range of gourmet sausages at the markets – all to save to open Salt. I knew that I could do it again, so when the opportunity came about to open a restaurant in Tokyo, then on the ships and Glass Brasserie; I had to make it happen. Then from there we took the brand into further Asian markets and we have had great success from it – but this has come through lots of hard work and many sleepless nights!”

Fast forward 18 years… and this year you’ve celebrated the opening of your 20th restaurant in Tokyo, how does that feel?

“Salt Grill & Tapas Bar Ginza was one of the most successful restaurant openings we have had to date. We have a great team in Tokyo and we hope our customers from Salt Tokyo will embrace this new restaurant.”

Did you dream about having a food empire as a kid?

“I’m from a middle-class family, a large family of seven boys, and my mum was a good cook, making comfort food: trifles, stews and soups. School didn’t agree with me and I had to fall into something. Cooking with mum was a good way to get into it. I couldn’t sit still; I was disruptive.

“But it was the best thing that happened to me; I don’t think I’d be here now if I hadn’t been kicked out of school. I did a four-year apprenticeship at a restaurant in Melbourne called Two Faces. Then I went to Europe and worked with the Roux brothers at Waterside Inn, a three-star Michelin restaurant. If you had asked me back then if I’d have 20 restaurants today, I would have laughed at the thought, but over time opportunities came about and persistence was the key. I never really took no for an answer and I still don’t.” 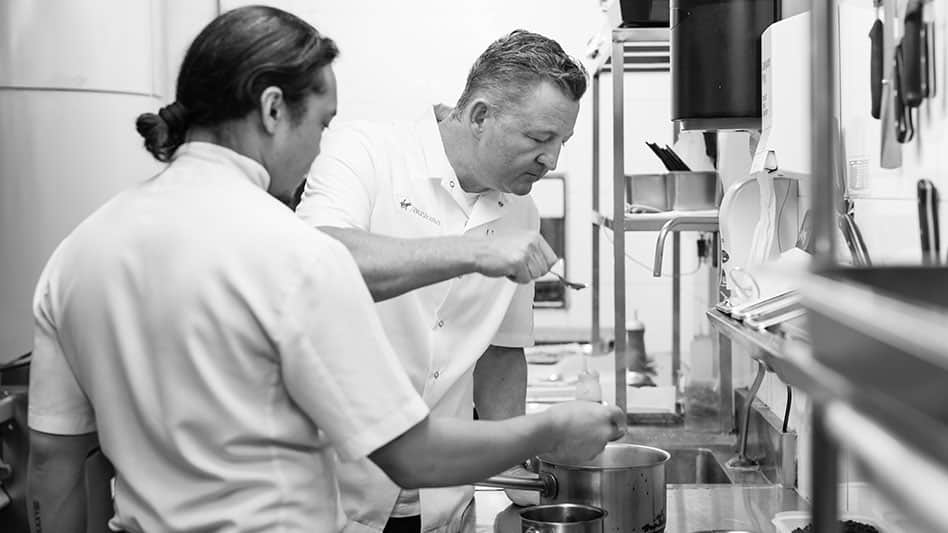 How did you learn the business of running a restaurant?

“Business is a learning experience. You have to keep learning from the people around you because the challenges keep coming. In the early days, I neglected the more mundane aspects of being in business, until it began to affect cash flow. I didn’t get much advice from my accountant, I thought I was doing fine because my first restaurant was really successful, so I opened a second and a third.

“There are a lot of things I didn’t understand – you can have great turnover but not a great profit. There are things I should have done – for starters sought financial advice. I always had an accountant checking things off but never utilised him to my full advantage. Once I did, I started to see a better profit and with a fresh approach my cash flow wasn’t under as much pressure.”

You recently posted on Instagram: “I don’t know the key to success, but the key to failure is trying to please everybody”. Do you think this attitude has helped you become the successful entrepreneur you are today?

“I do love a good quote! I think the main message from this quote was for people to stay true to what they believe in, and in this industry that means their own career path and their own style of cooking. You can’t please everyone, but if you try then you cheat yourself.”

What advice would you give restaurateurs who are looking to expand and build their brand?

“Think outside the square and never accept no for an answer. Everyday obstacles are put in front of you and you learn to work around them. It takes passion, focus and lots of hard work. Take risks, but only calculated ones. Invest money wisely and don’t put all your eggs in your basket. It’s important to follow a business plan with defined goals, to give you a clear path forward. If people think there’s a short cut, forget it! This career path will not be your average 9-5pm job but the rewards will be worth it.”

How did you become the consulting chef for Virgin Atlantic (and later Virgin Australia Business Class)?

“When I was running Salt in Sydney, it was 2002 at the time and some guys were eating in the restaurant and they wanted to see me. After their meal, they advised me their boss was coming next month and could they get my contact details. They said their boss was Richard Branson and I didn’t believe them!

“About a month later Richard Branson rang me and said, ‘Luke, it’s Richard Branson,’ I thought one of my chefs was playing a trick but it really was him and he wanted a table for lunch. After lunch he then wanted to come for dinner again that night, I cooked for him and then he asked me out for drinks after. He asked me if I’d go to his island in the Caribbean and cook for a few weeks and would I consider doing his food for Virgin Atlantic.

“I went to Necker Island with some of my chefs to cook for them. In the end, I didn’t do much cooking, mainly just one dinner, instead Richard wanted me to enjoy the island and we talked food and business. And the rest is history! It’s been a great partnership ever since from Virgin Atlantic to now Virgin Australia. Working on the business class menu has been really rewarding for me and it’s something I hope I can do for many more years.”

What are the biggest challenges you face today? What is it like running 20 restaurants, in different time zones etc?

“Ensuring brand consistency is the major challenge of having multiple arms to any business. Also, ensuring that staff are trained on the menus, running the floor and the general operations of each restaurant and that everyone is where they need to be. With restaurants overseas and in multiple locations it’s hard to be there all the time, so you need to invest in key staff to ensure the restaurants run smoothly when you can’t be there. You need to ensure you stay true to your brand and your cooking philosophy, invest in key staff that you trust and be confident in what you do.” 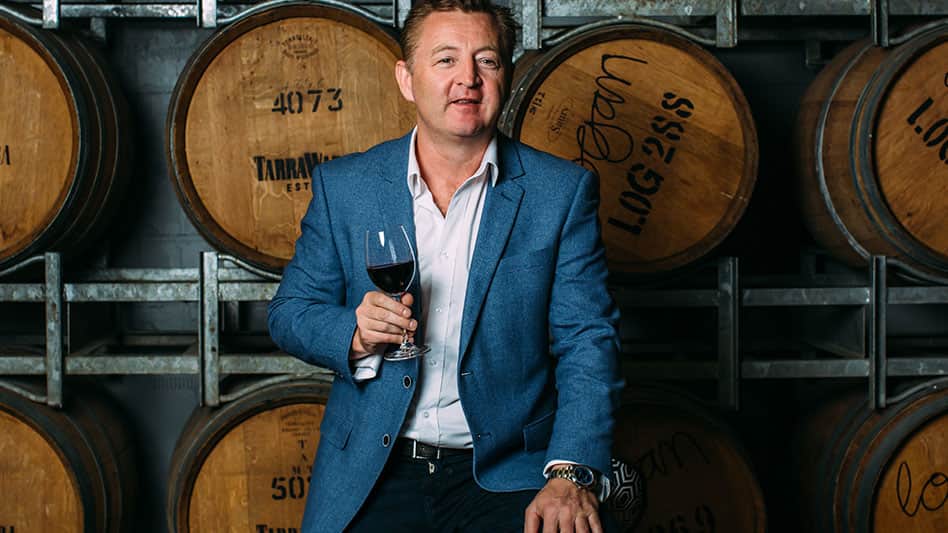 Just when the world thought you’d achieved everything, in 2005, you founded the Appetite for Excellence Awards. You clearly have enough on your plate – why did you start this?

“The program was initially created as I felt there was a definite lack of opportunity and support in the industry for young hospitality hopefuls within Australia. Appetite for Excellence was created to give young chefs, waiters and restaurateurs’ greater opportunities within the hospitality industry. The program is all about recognising and rewarding our young hospitality talent within Australia. We are in the 11th year of the program and we’re proud of how it’s evolved over the years.”

What do you think about the restaurant culture in Australia at the moment?

“Australia has a fantastic restaurant culture; we are serious about what we do and that’s something to be recognised. We have some of the best produce in the world and chefs are really embracing this by using native, local ingredients and showcasing these on their menus. I think Tourism Australia have had a lot to do with how people from around the world see Australia as a real food and wine destination and that we aren’t just shrimp on the barby!”

What role does social media play in your success, if at all?

“Social media platforms are great tools that our groups use often. It’s a great way to keep our followers up to date with what we are doing; new restaurant openings, events, new menus and specials.”

Is technology crucial to managing your restaurant empire and allow you to work in different time zones?

“Having restaurants in different locations, modern technology has certainly made it easier for me to oversee each outlet – I love that I can just jump on a Skype chat with my restaurant manager in Tokyo and then the manager in Jakarta, all in one day! I don’t know what people did before things like Skype and iPhones.”

“I wouldn’t change anything and I don’t have any regrets. Sure there are some things in hindsight that you wish you saw coming or that you could have done differently but you take these, you own them and you learn from the experience and become a better, wiser person from it.”

“June 2017 will see two new dining concepts on board P&O’s new Pacific Explorer: Luke’s – a relaxed, easy going, all-day dining café and modern eatery. Taste of Salt – an intimate 16 seat communal table with the restaurant dedicated to showcasing our signature Salt Grill dishes in the form of a five-course degustation menu with matching wines. I just launched my new cookbook, Sharing Plate and I’m looking to open more  Chicken Confidential stores in the next 12 months.”