Menu
Home > Ideas > How To > Blind Baking Pastry: A Skill Every Aspiring Chef Must Know

Blind Baking Pastry: A Skill Every Aspiring Chef Must Know 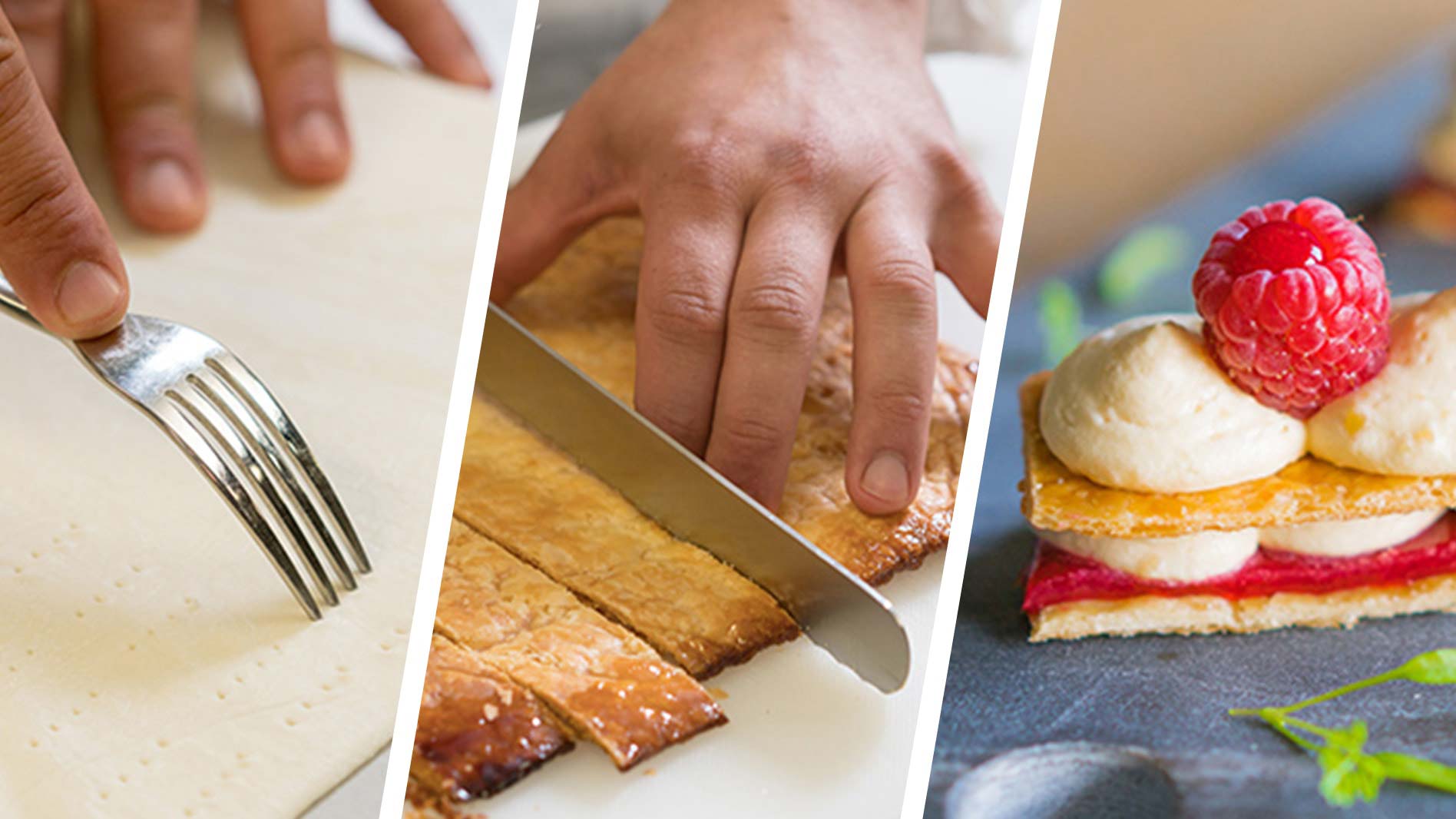 Blind Baking Pastry: A Skill Every Aspiring Chef Must Know

Ever wonder how your fellow bakers achieve the perfect pie shell every time? Or how their desserts are always topped with a perfectly flat piece of pastry? Introducing blind baking – a pastry chef’s beloved technique helping them achieve desirable treats every time.

Walking past a window that has a line of faultlessly baked pastries, coated and topped with some of the most flavoursome ingredients is every customer’s desire. A chef’s dream, is creating those delicious treats perfectly, every single time.

Ensuring the pastry shells are beautifully golden and flaky is the task we all aim to achieve every time a tray is placed carefully into the oven. The tears, sweat and hours that goes into these tasty pieces of art is beyond words.

But now you can achieve mouth-watering results every bake. And it all comes down to one method of cooking – blind baking! 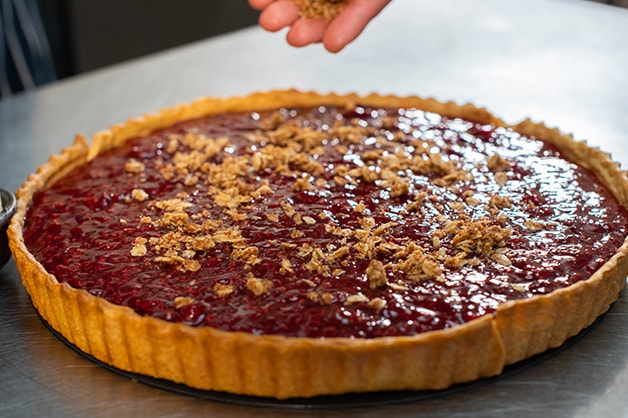 What is blind baking?

When it comes to delivering flawless golden pastries that aren’t soggy or uneven in shape, chefs praise the blind baking method. Blind baking is the process of baking a pie crust or pastry without its filling or toppings.

Blind baking is required for recipes where the pastry crust needs to be completely baked before being filled with an unbaked filling, such as cheesecakes, puddings and cream pies. The technique also comes into play when the filling for the dish has a shorter bake time compared to the crust – for example quiche, meat pie and apple pie recipes.

How to blind bake?

Blind baking can be done in a number of different ways while still producing the same, flaky pastry outcome. The most common way is lining the pastry shell with aluminium foil or parchment paper, then filling it with weights to ensure the crust retains its shape during the baking process. Another process involves placing a tin on top of the crust, then inverting the tins for baking, which then radiates heat allowing the pastry to brown evenly.

The alternative measure involves piercing the raw pastry repeatedly with a thin needle or fork to produce small holes. The small pierced holes allow the steam to escape, eliminating the cause of bubbling. This is an important step as it provides an escape route for steam, which causes the layers of pastry to puff up and the sides of the case to sag – forming a lopsided shape. 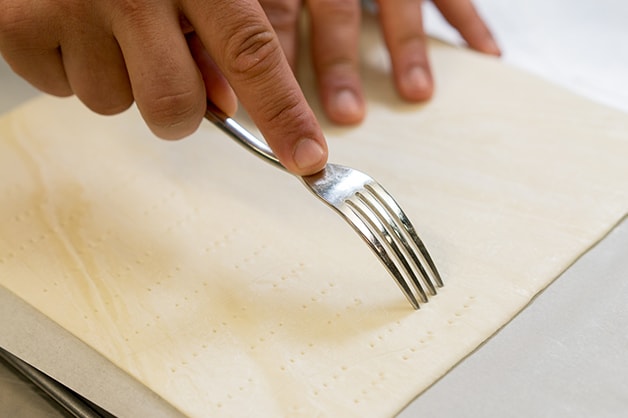 If your filling requires a short cooking time, it is important you partially bake the pastry to stop the filling from over cooking or the risk of having uncooked pastry at the bottom. A useful tip for partially baking the dough is to keep it in the oven until the bottom of the crust appears pale in colour while still looking dry and flaky. The pastry will turn a light, golden brown once it cooks through; this would be required for recipes that have an uncooked filling.

Chef Adam Khazzal from Adam’s Bakeshop in Melbourne, uses the blind baking technique for many of his recipes, including his famous French Vanilla Slice and Vegan Crumble with Raspberry Rhubarb. For his slice recipe, the experienced baker places the Pampas Puff Pastry on a lined tray, pierces small holes with a fork and covers the pastry with another sheet of paper, followed by a tray filled with raw rice. In this case, the rice acts as a weight to stop the pastry from growing too high while in the over. 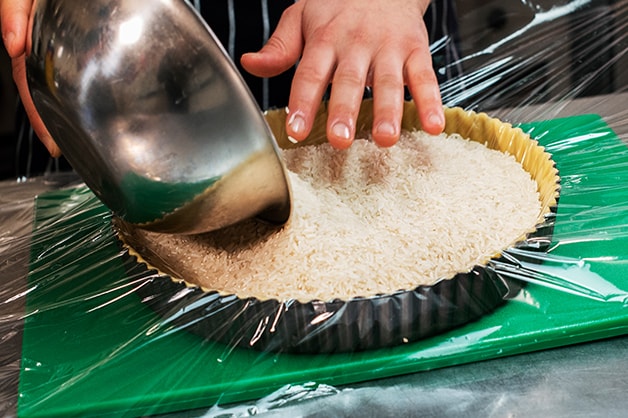 For his vegan tart, Chef Adam lines a pan with Pampas Shortcrust Pastry, covers it with cling wrap and fills the shell with raw rice. To ensure perfect consistency, he places the raw pastry in the oven at 180 degrees Celsius for 15 minutes before removing the filling and allowing it to cook for a further 10 minutes.

Over at Stone’s Patisserie in Bowral, Chef Patisserie Mark Stone also blind bakes regularly, especially for his Dark Chocolate Tart. Instead of using rice, the chef blind bakes using stainless steel baking beans due to them being able to conduct heat, eliminating the risk of the pastry bubbling. 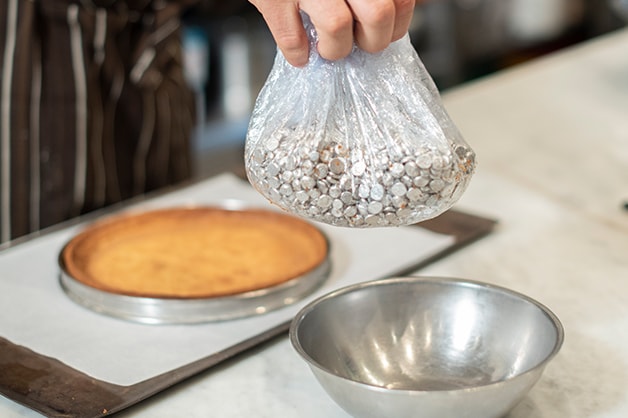 As mentioned previously, different chefs use different tools and equipment when it comes to blind baking. Though one of the most common questions regularly asked is whether docking or weights are better? Docking the pastry simply means to prick the crust with a fork or sharp utensil to create small holes that will allow the steam to escape during the baking process. By docking the pastry, the crust won’t bubble or cook unevenly.

While docking is quicker and less fussy than using weights, many chefs still opt for the ceramic or metal beads for blind baking. Weights prevent the crust from forming air pockets or shrinking during cooking as it weighs down the dough to ensure it holds its shape. The use of weights also give support to the sides of the shells, eliminating the risk of the filling seeping through the holes and turning the pastry into a soggy mess. If you choose to use weights, make sure they are push evenly all the way to the edge to help keep the sides from collapsing in. 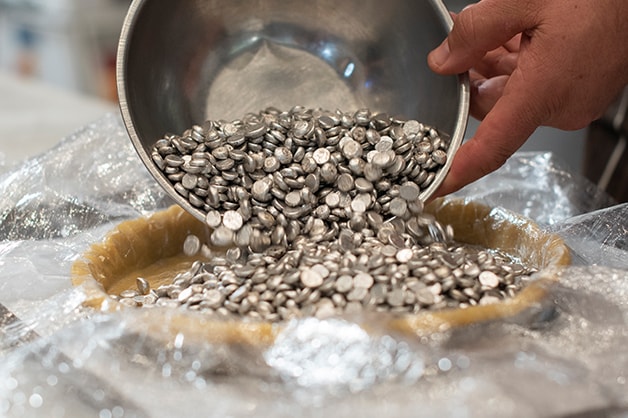 Though when it comes to weights, there are a number of different styles and sizes on the market. The most common type are ceramic balls that are around an inch in diameter. Stainless steel balls also work in the same way except that the balls are connected, making it easier for you to add and remove them during the process. But if you were after something sturdier, chefs are now using steel discs as they can fit on-top of the bottom of the pie and hold it flat. But if you don’t have any weights in your kitchen and you didn’t want to dock your pastry, it is common for chefs to use rice, dried peas, lentils or beans as weight replacements. Like Chef Adam, bakers wrap the rice and beans in glad wrap to form a weight and place them inside of the shell during baking.

With blind baking the task of creating delicious, golden treats can be easy. Despite there being a number of tools and techniques that can be used for blind baking, finding the right one that fits the task at the time will take practice and patience. But after some trial and error, there is a sweet reward on offer – your menu-winning masterpiece; never forget that. 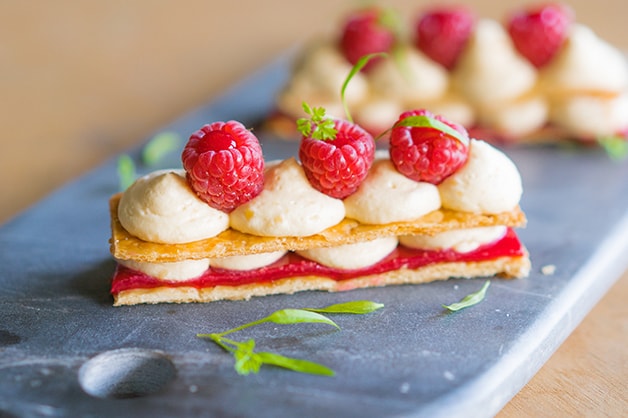 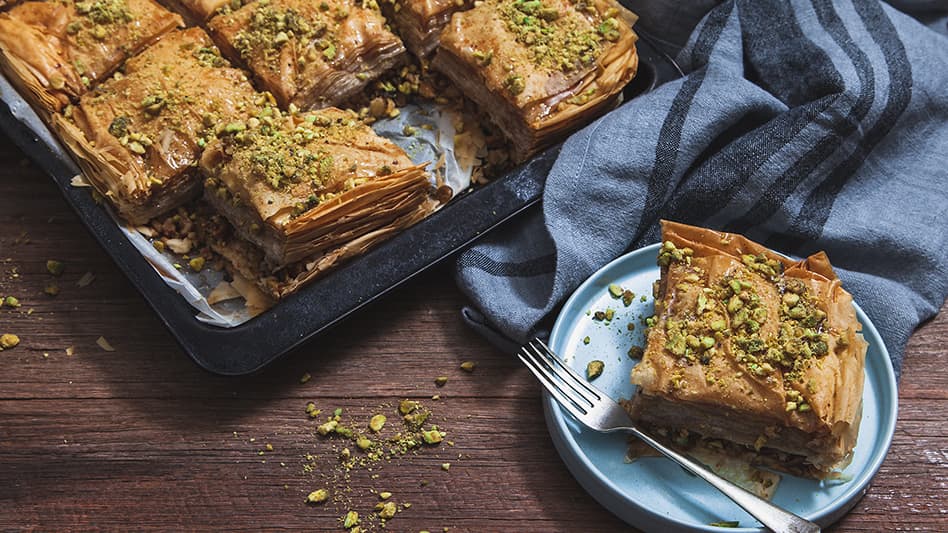 Add some middle eastern spice to your menu with this traditional Lebanese Baklava recipe! It is quick and easy to make using Pampas Filo Pastry and is perfect for cafes and caterers looking to diversify their dessert offering.
Read more 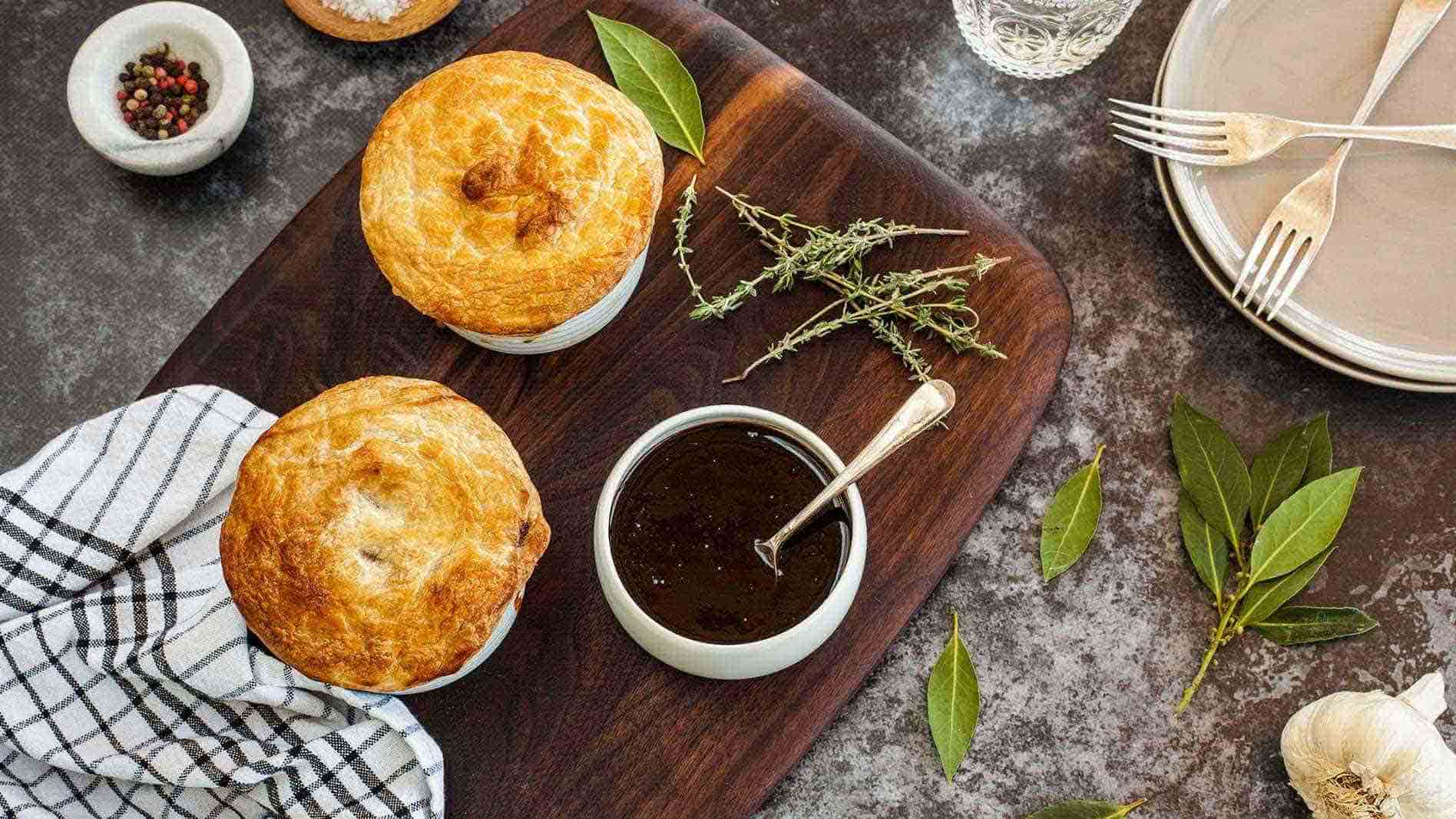 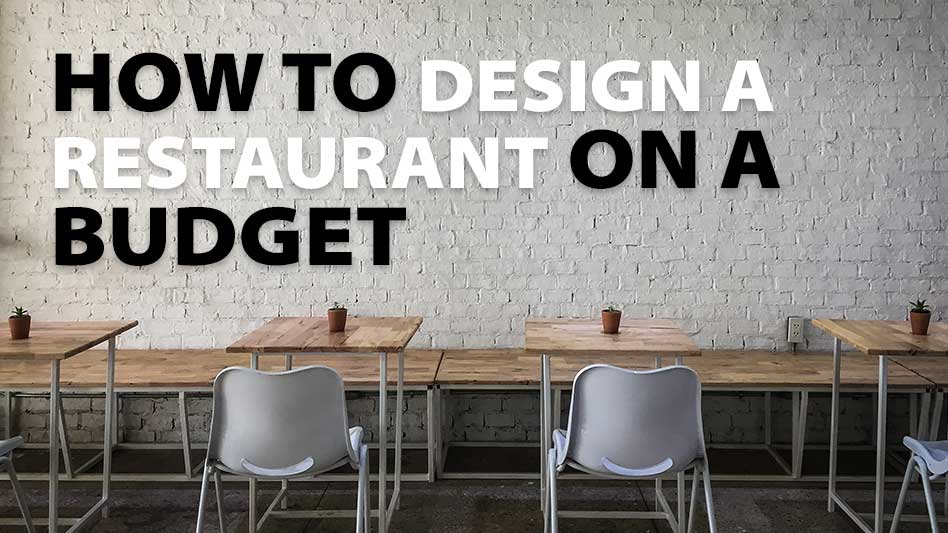 9th March 2022
It’s no secret that opening a restaurant is expensive. But what if you can do it while sticking within your budget?
Read more 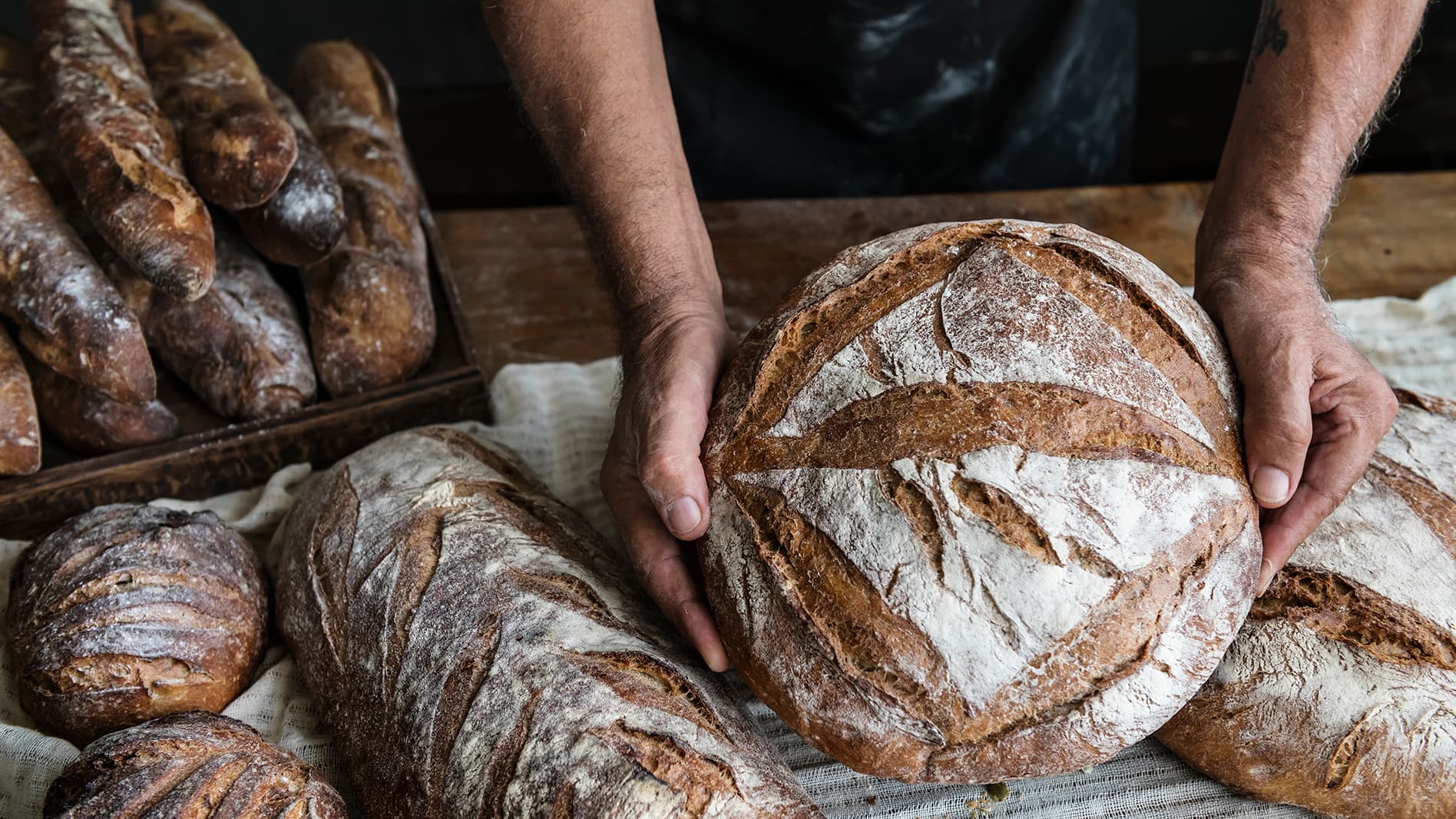 18th November 2021
Want to get more out of your regular fresh bread order? We uncover five ways you can use fresh bread in your kitchen, away from the standard sandwich offering.
Read more

2nd November 2021
Building a successful commercial kitchen is no sure thing. However, with the right systems in place, success can be a chop, slice, and dice away. Here’s what you need to build the most efficient systems in your venue.
Read more
Also of Interest
Start Getting Fed with Ideas