Menu
Home > Ideas > Trends > The Sweet Side Of Rice: Desserts Of Asia

The Sweet Side Of Rice: Desserts Of Asia 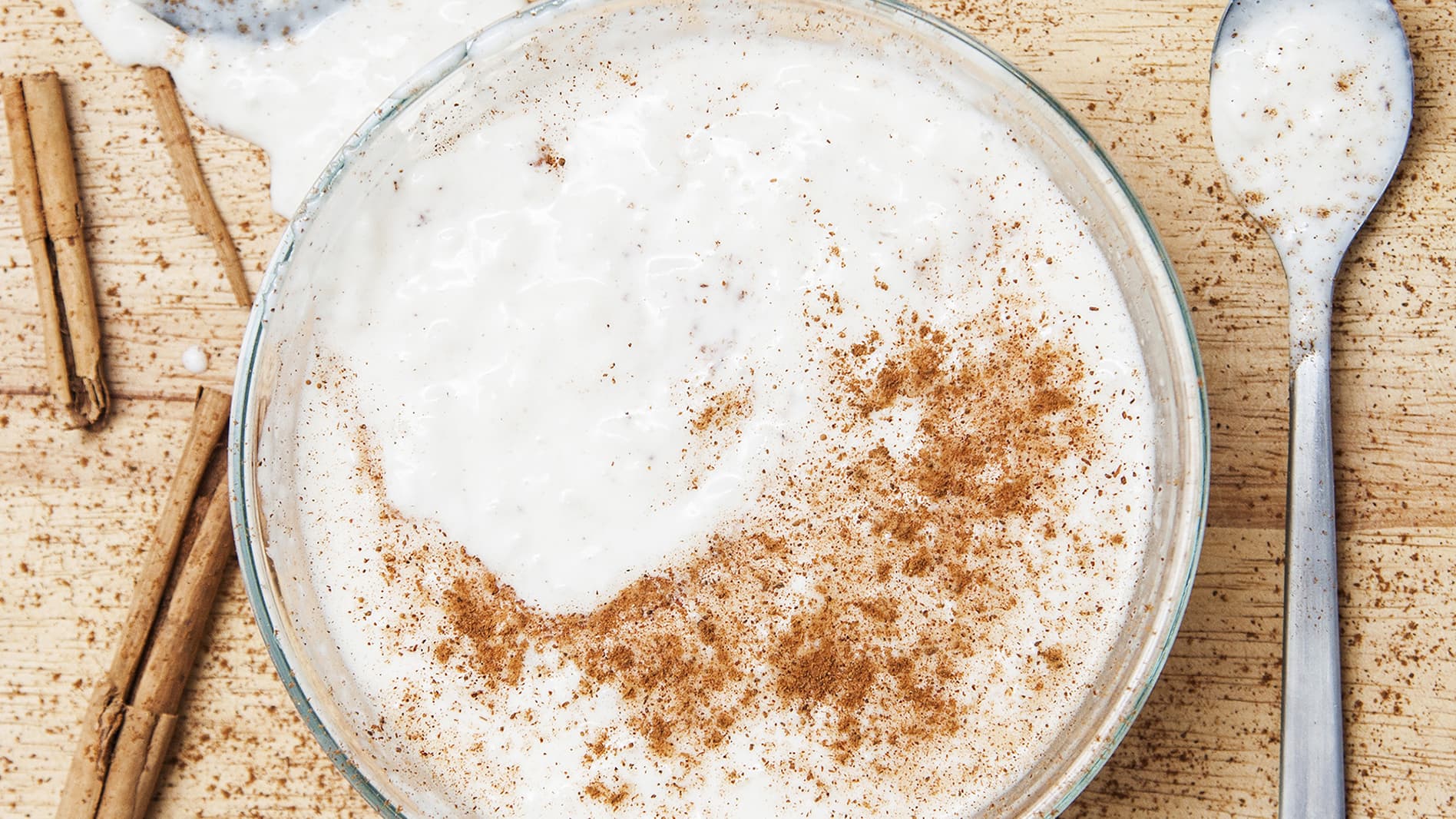 The Sweet Side Of Rice: Desserts Of Asia

Want to get more out of your rice order? Want to use the grain across your menu, not just as part of your mains but as a dessert?

We all know rice is a kitchen staple. It is commonly used as a savoury component to dishes; whether it be as a side for a curry, a main for fried rice or as an appetiser such as sushi or formed into rice crackers. But have you ever considered turning the fluffy, grain into a dessert offering? To help fuel you with inspiration, we’ve unearthed the most creamy, delicious desserts on offer throughout Asia. And while you may be aware of some of these desserts, others may be foreign to you, so now is the time to experiment. 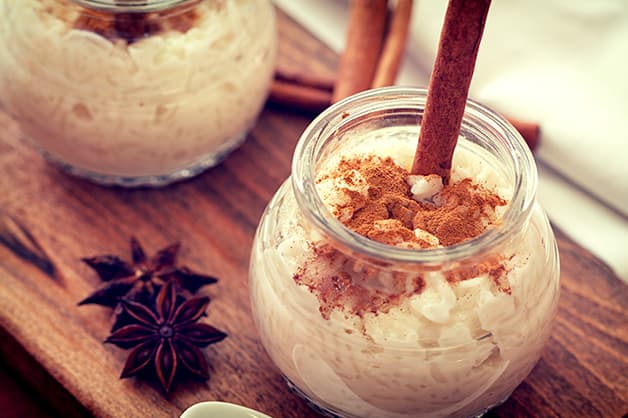 Everyone knows of rice pudding, it’s basically the universal offering across the Asia-region. Despite it being a common dish, many countries have adapted the ingredients and process to suit their cultural requirements, needs or simply tastebuds. The pudding is made from rice that is combined with water or milk and flavoursome ingredients such as raisins and cinnamon. Some chefs also include eggs or custard to provide that extra thick texture. Though, rice pudding is like vanilla ice cream, it works well with a whole range of different flavours and topping. For a modern twist, you can create a salted caramel rice pudding that offers the same creamy texture but has a salty but sweet flavour component. Or you can create a fresh fruity offering with the addition of a fruit compote and nuts sprinkled over the top to bring it to life.

So, how exactly do the countries differentiate their rice puddings?

In India, they call their rice pudding Dudhapak. The dish follows a similar process to the general rice pudding recipe, with the steps of slowly boiling milk and sugar, as well as basmati rice, nuts and saffron. They also have kheer, which is a traditional cardamom scented rice pudding. This version of the dish has a particular richness to it thanks to the inclusion of whole milk, which has been reduced by half during the cooking process to produce a thick, creamy base.

Over in Thailand, their banana rice pudding appears on menus across all restaurants, no matter their type or style. The popular dish is created with the use of sticky rice and coconut milk to ensure the creaminess is at its peak. It also incorporates fresh bananas, brown sugar, cinnamon, nutmeg and star anise.

The Indonesian ketan hitam dish is their take on the rice pudding but as a point of difference they use black rice in place of white rice. To ensure the creaminess is present, the rice is boiled until it becomes soft followed by the addition of coconut milk and palm sugar. As a variant, pandan leaves and salt are added to give the dish a strong aroma. Additional toppings that are commonly used include baked or fried banana or cinnamon powder.

Tsamporadro is the Pilipino replica of the dish. The traditional chocolate rice pudding can be served both hot and cold and has a thick, grainy texture. Made with cocoa powder, the dish is topped with nuts and a sprinkle of shredded dark chocolate. For the extra sweetness, condensed milk is typically poured over the top of the completed dish, forming a white swirl over the dark rice component. As an added topping, the dish is traditionally served with dried fish (tuyo) on top or on the side as a way to balance out the sweetness. 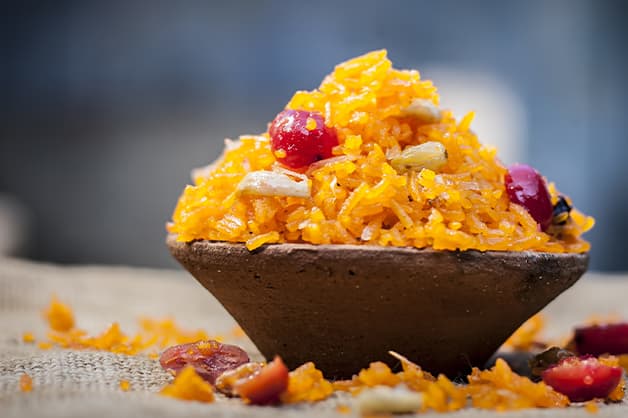 Zarda rice is a sweet Indian and Pakistani dish that incorporates the flavours of fresh fruits and nuts. The dish is appealing to the eye and is known to catch the attention of customers thanks to its bright yellow colouring. The vibrant colour is created with the use of saffron, though some chefs use food colouring for the yellow affect but it is important to note that the same flavour profile won’t then exist. The dish is typically created with basmati rice, saffron and sugar and served warm. Chef Robin from the Novotel Darling Harbour in Sydney tops the traditional dish with mixed berries, such as strawberries, raspberries and blueberries, as well as cherries and sultanas. Though, any type of dried fruit can be added to the recipe to add different textures and flavours to the dish. See how Chef Robin makes his recipe here. 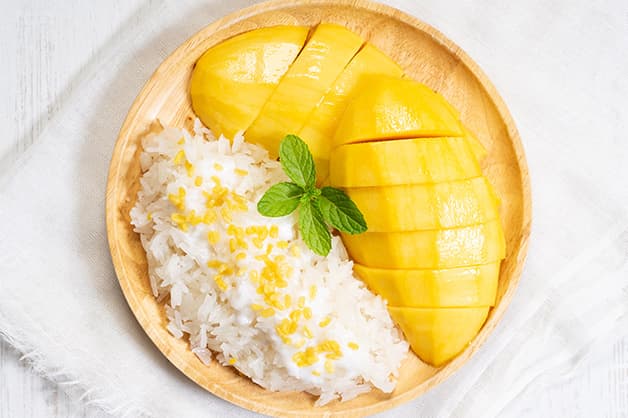 Over in Thailand, their famous mango sticky rice dessert is popular amongst locals and tourists. The flavoursome dish has also made waves in Australia popping up on menus across the country. The traditional Thai dessert is made with glutinous rice, fresh mango and coconut milk. Glutinous sticky rice is commonly used for this recipe because it offers the best texture. For this dish, the rice is soaked then cooked via the steaming process. Coconut milk is mixed with sugar and salt and heated without reaching boiling point. The mixture is then added to the rice and rested to allow the rice to absorb the milk. Freshly sliced mango is then added on top as a garnish. Though when it comes time to selecting mangos for the dish, yellow mangos are typically used because of their sweeter taste compared to green mangos. If you are wishing to offer this dish during mango’s off-season, they can be switched out for other fruits. Across Asia they use durian, which is the fruit of several tree species belonging to the genus durio, as an alternative. For a point of difference with your mango sticky rice dish, some restaurants are substituting half of the white rice with black Thai rice that will then offload a purply colour. Over at the renowned China Doll restaurant in Sydney, they offer customers a black sticky rice with seasonal fruit.

While you already have rice stored away in your kitchen, why not get creative and turn the savoury staple into a dessert delight for your customers? Whether it is as a chocolate or banana rice pudding or as a zarda with berries or a mango sticky rice offering, the opportunities are endless. Start experimenting today and see how you can put a twist on these Asian-infused classics.

Chef Paul has shared his Nasi Goreng recipe using our Fortune Everyday Jasmine Rice. It's fluffy in texture, rich in flavour and overall perfect for a lunch or dinner menu.
Read more 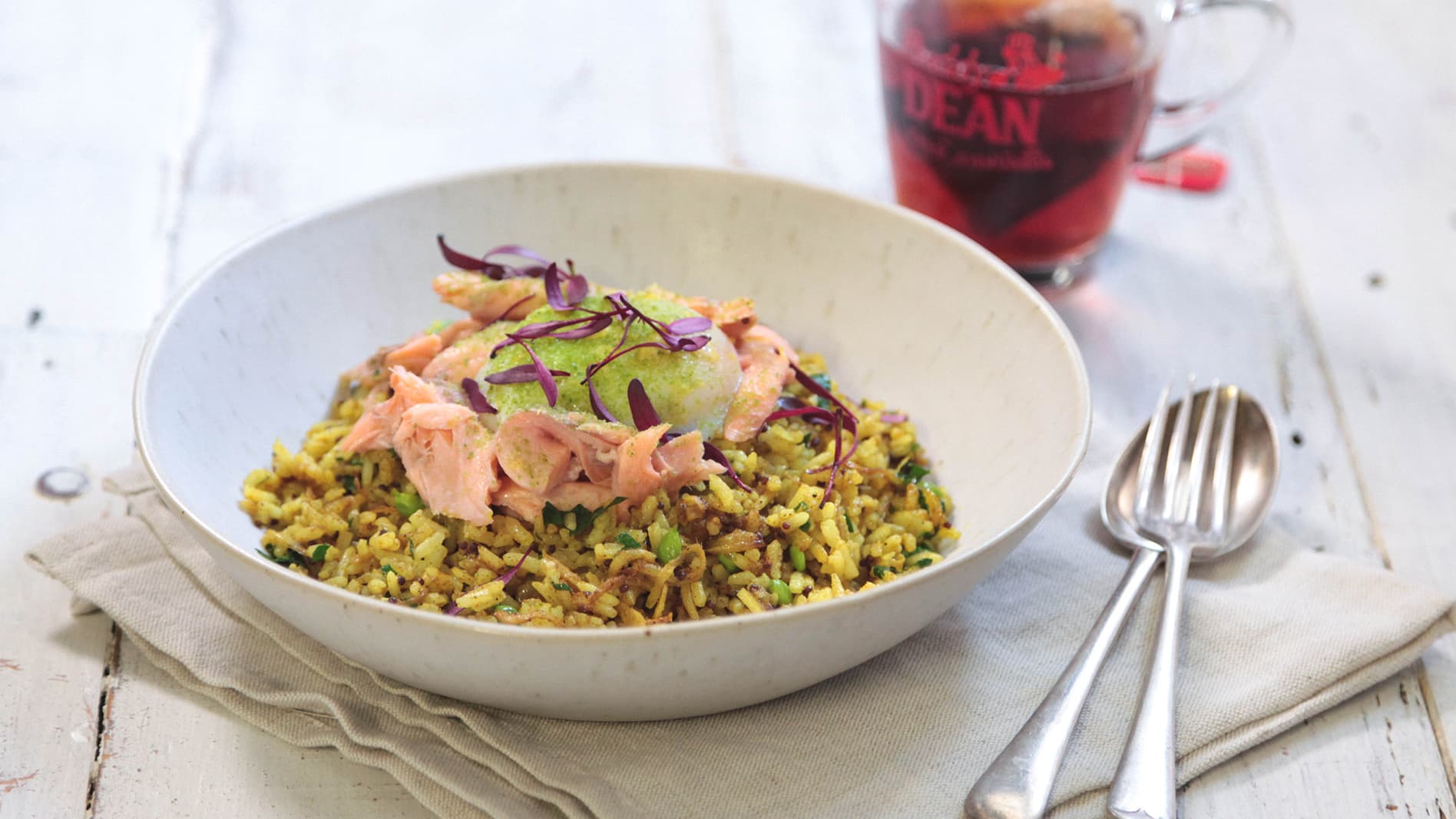 Looking for some main course inspiration? Chef Kai has the dish for you - check out his version of the smoked trout kedgeree using our Fortune Long Grain Rice.
Read more